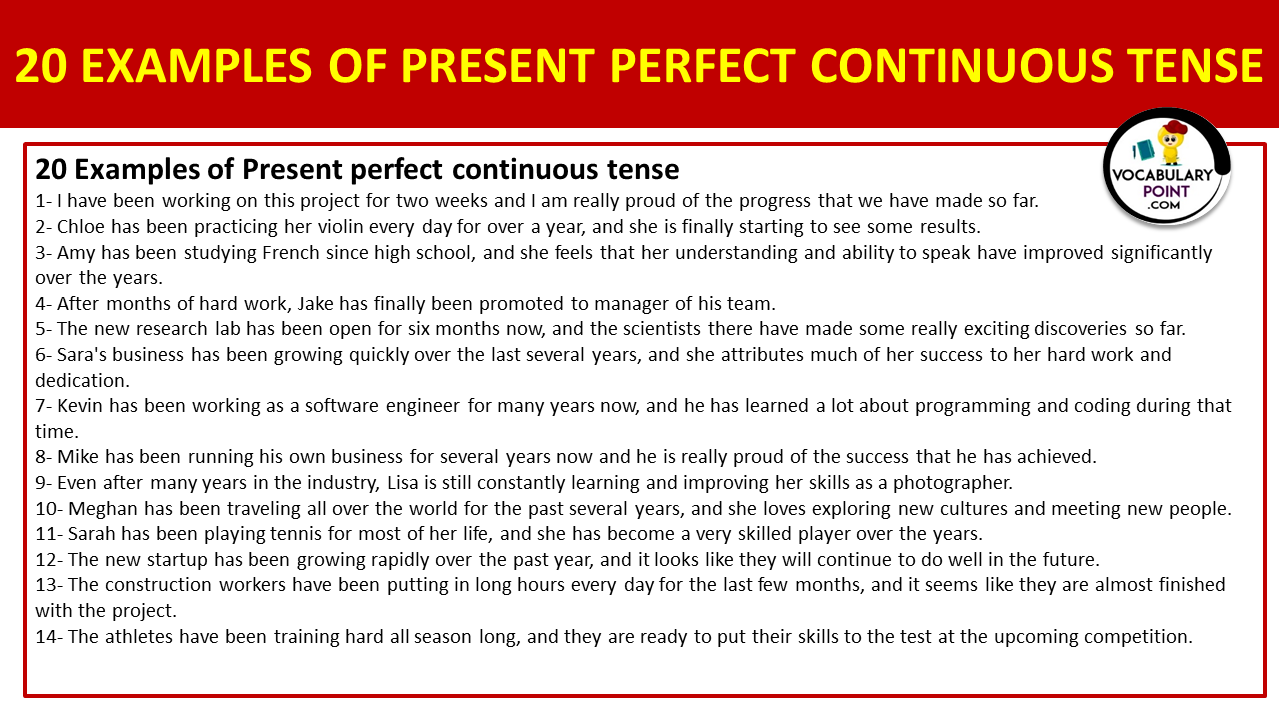 20 Examples of Present Perfect Continuous Tense. The Present perfect continuous tense is used to describe actions that began in the past and are still happening in the present. One of the key features of the present perfect continuous tense is that it highlights an action or state that has been ongoing for a certain period of time. This can be useful for describing events such as work projects, long-

Here are some examples:

The Present perfect continuous tense is used to describe actions that began in the past and are still happening in the present.

Present perfect continuous can also be used to describe changes that have happened over a period of time. For example: 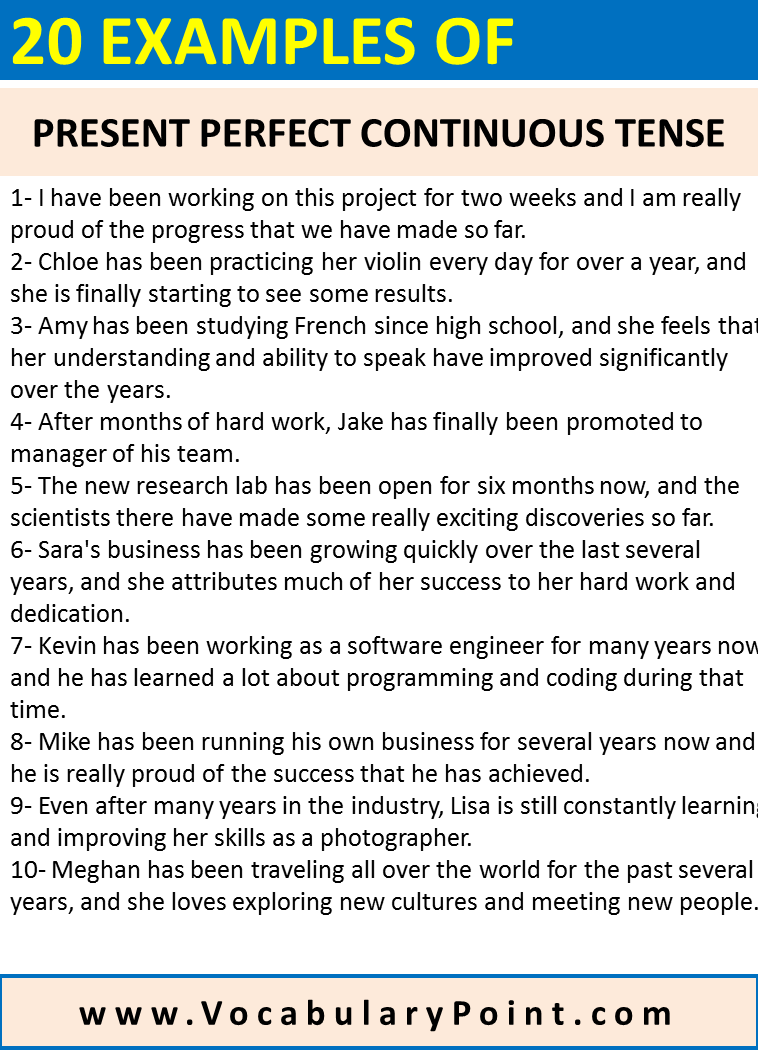 1- I have been working on this project for two weeks and I am really proud of the progress that we have made so far.

2- Chloe has been practicing her violin every day for over a year, and she is finally starting to see some results.

3- Amy has been studying French since high school, and she feels that her understanding and ability to speak have improved significantly over the years.

4- After months of hard work, Jake has finally been promoted to manager of his team.

5- The new research lab has been open for six months now, and the scientists there have made some really exciting discoveries so far.

6- Sara’s business has been growing quickly over the last several years, and she attributes much of her success to her hard work and dedication.

7- Kevin has been working as a software engineer for many years now, and he has learned a lot about programming and coding during that time.

8- Mike has been running his own business for several years now and he is really proud of the success that he has achieved.

9- Even after many years in the industry, Lisa is still constantly learning and improving her skills as a photographer.

10- Meghan has been traveling all over the world for the past several years, and she loves exploring new cultures and meeting new people. 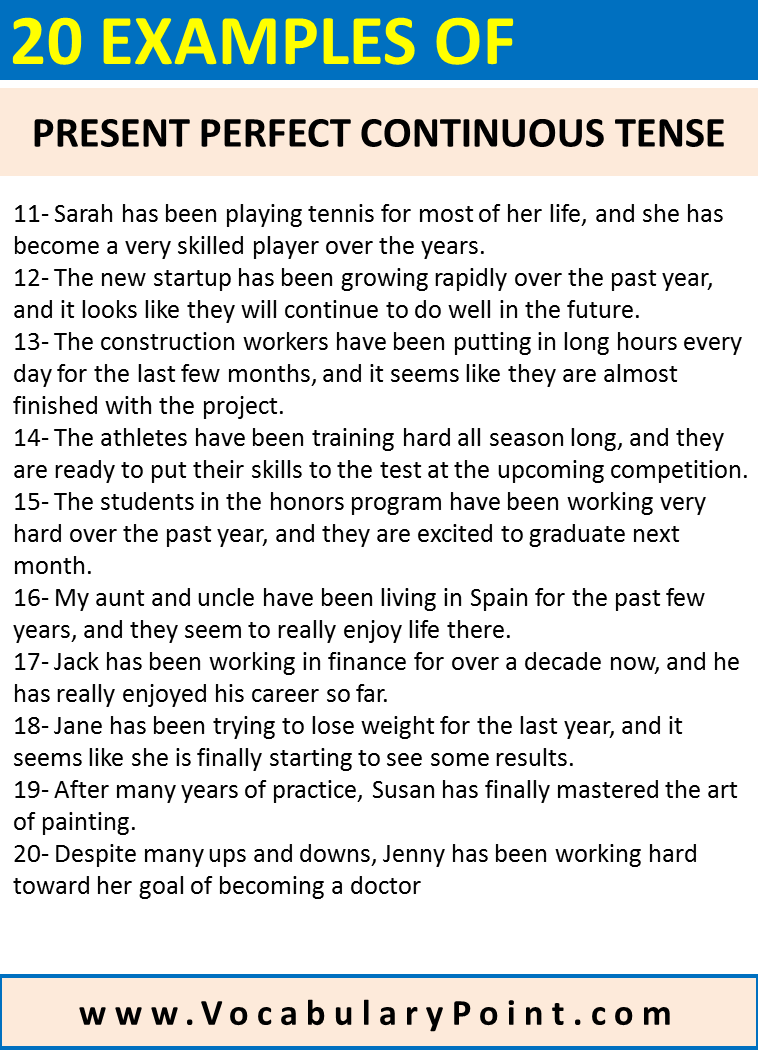 11- Sarah has been playing tennis for most of her life, and she has become a very skilled player over the years.

12- The new startup has been growing rapidly over the past year, and it looks like they will continue to do well in the future.

13- The construction workers have been putting in long hours every day for the last few months, and it seems like they are almost finished with the project.

14- The athletes have been training hard all season long, and they are ready to put their skills to the test at the upcoming competition.

15- The students in the honors program have been working very hard over the past year, and they are excited to graduate next month.

16- My aunt and uncle have been living in Spain for the past few years, and they seem to really enjoy life there.

17- Jack has been working in finance for over a decade now, and he has really enjoyed his career so far.

18- Jane has been trying to lose weight for the last year, and it seems like she is finally starting to see some results.

19- After many years of practice, Susan has finally mastered the art of painting.

20- Despite many ups and downs, Jenny has been working hard toward her goal of becoming a doctor