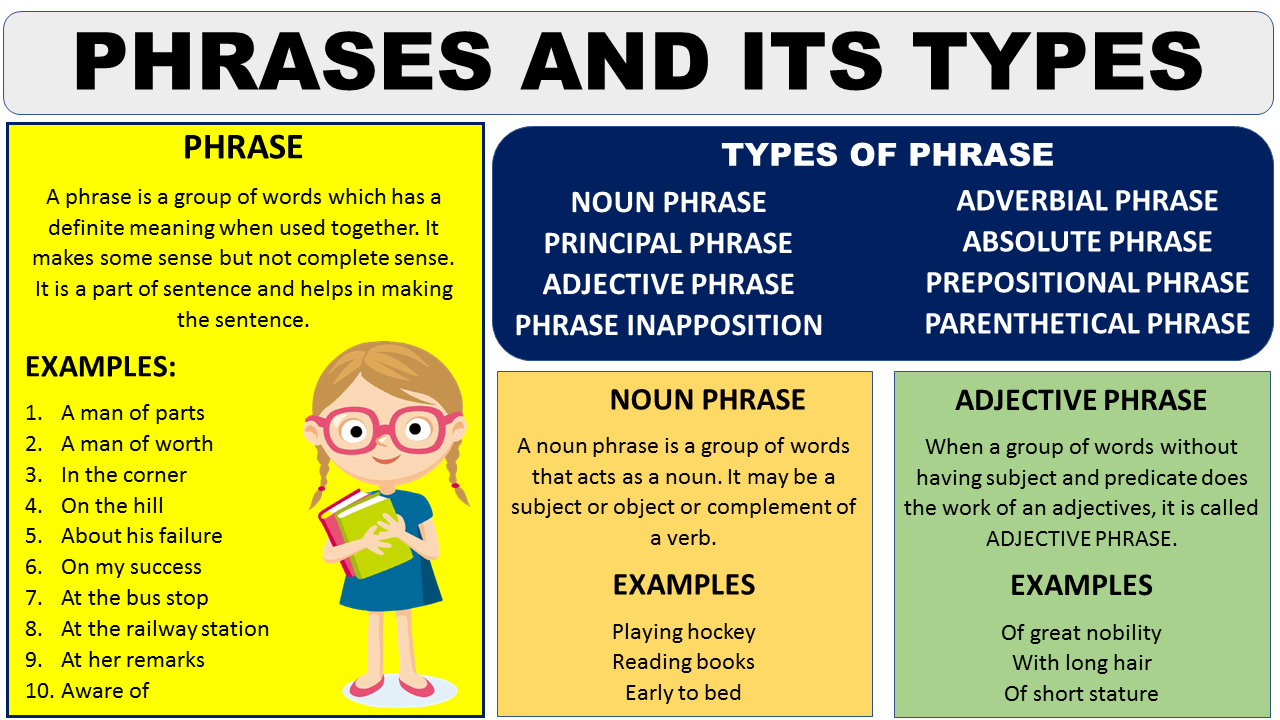 PHRASES AND ITS TYPES. Here is a complete 8 types of phrases with examples and Exercise that are very helpful to learn about phrase and its details. Here is a collection of words when they joined then they give a complete meaning of a sentence. Phrases and its types with detailed lesson and PDF are listed below.

Must learn : Figure of speech

PHRASES AND ITS TYPES

A phrase is a group of words which has a definite meaning when used together. It makes some sense but not complete sense. It is a part of sentence and helps in making the sentence.

A phrase can be turned into a meaningful sentence as:

This word gold chain is the sum of words. (Noun + Noun) in this sentence there is no finite verb. It is work as a unit. That’s why it is called phrase. (Noun Phrase)

Golden chain is a Golden is a Adjective with a Noun. In chain there is no infinite.

But is is made noun and adjectives. This is not a unit or a group.

Made of gold without finite verb is a sum of words.it is used as a unit. That why it is called Phrase.

Which is made of gold is a sum of words. But it has finite verb ‘’IS’’. That is called Clause not Phrase. 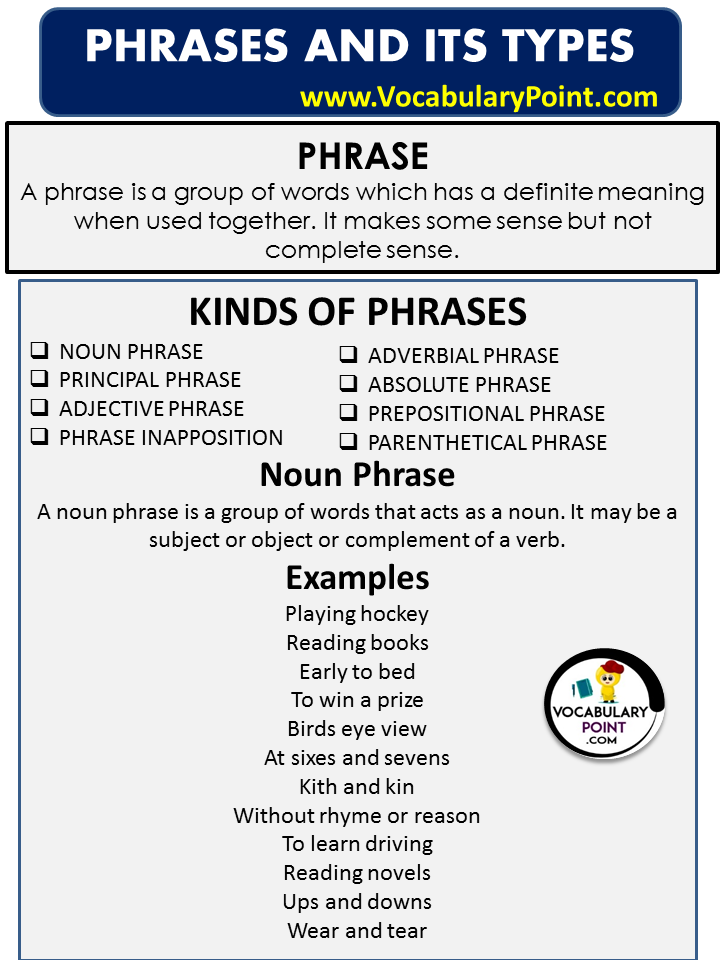 Here is a list of phrases and its types:

A noun phrase is a group of words that acts as a noun. It may be a subject or object or complement of a verb. 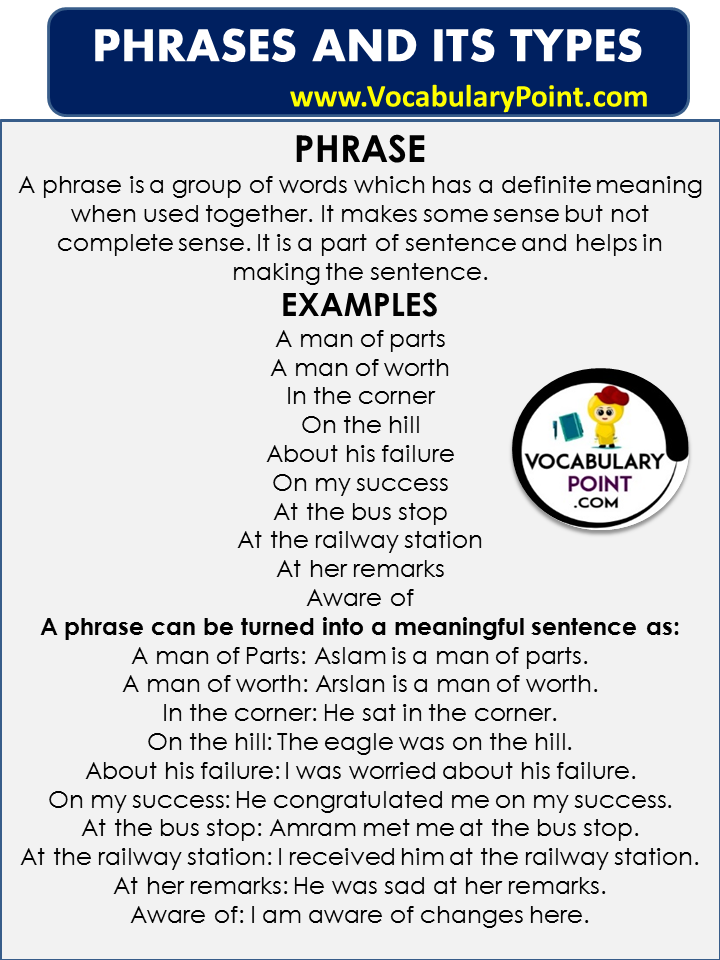 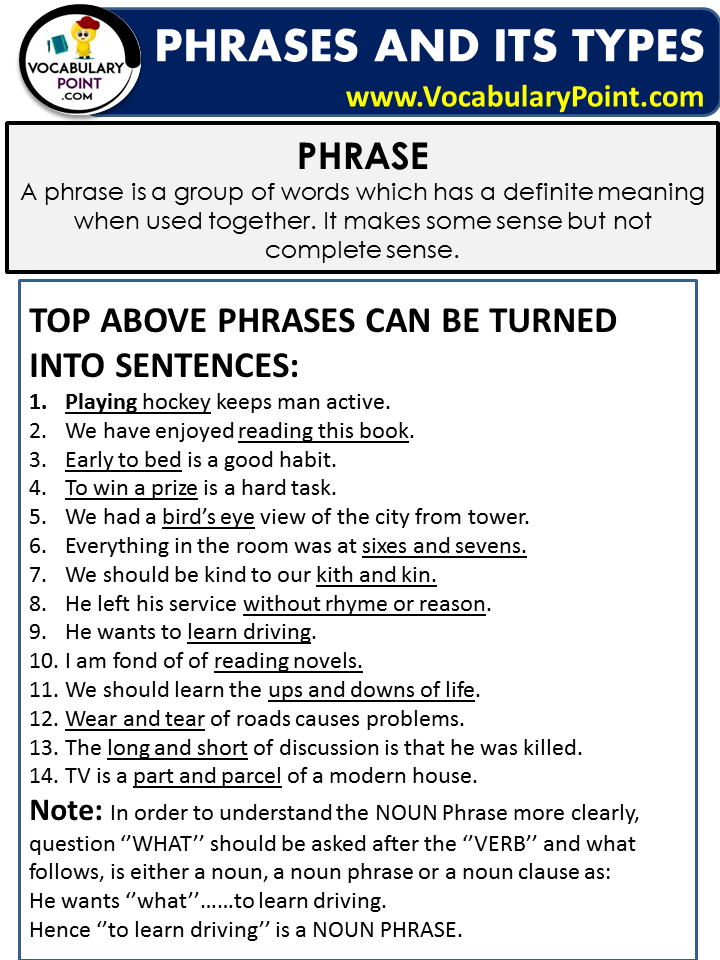 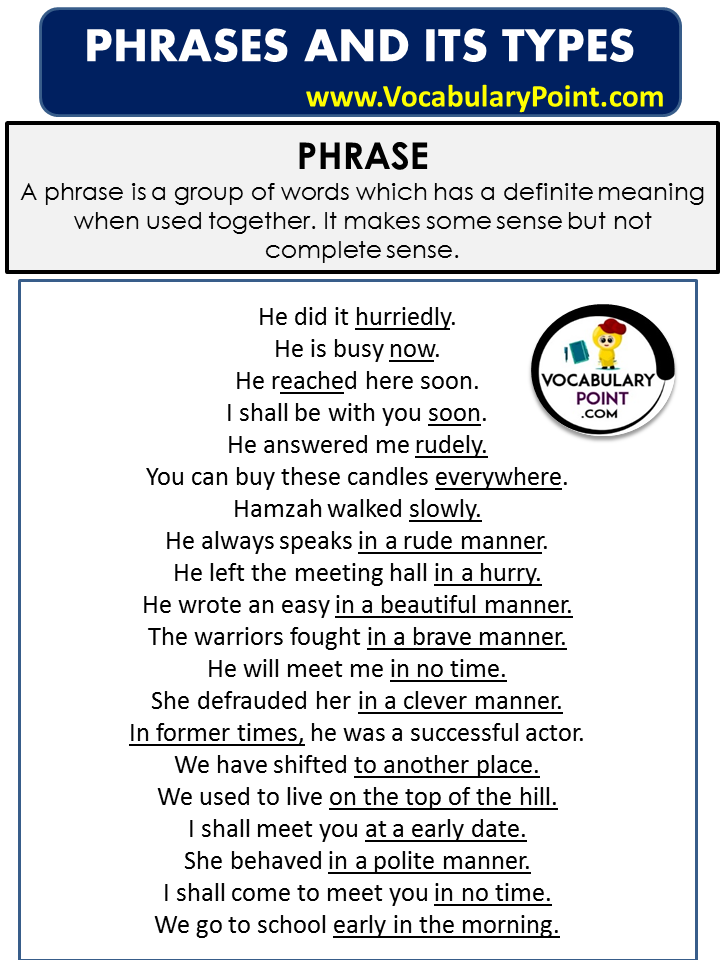 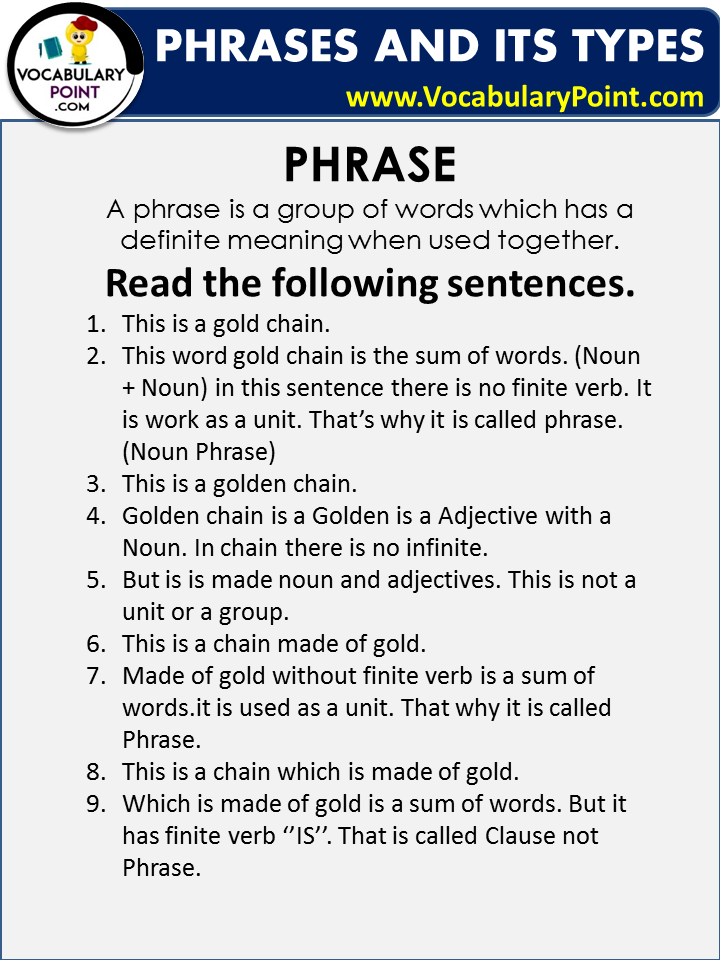 TOP ABOVE PHRASES CAN BE TURNED INTO SENTENCES:

Note: In order to understand the NOUN Phrase more clearly, question ‘’WHAT’’ should be asked after the ‘’VERB’’ and what follows, is either a noun, a noun phrase or a noun clause as:

Hence ‘’to learn driving’’ is a NOUN PHRASE.

HOW CAN WE FIND PHRASE IN A SENTENCE: Here is a list of some sentences with details:

In this sentence something is a noun and demanded is a verb and he is a noun.

In this sentence he is a subject demanded is a verb, something to eat is a noun phrase with infinitive. 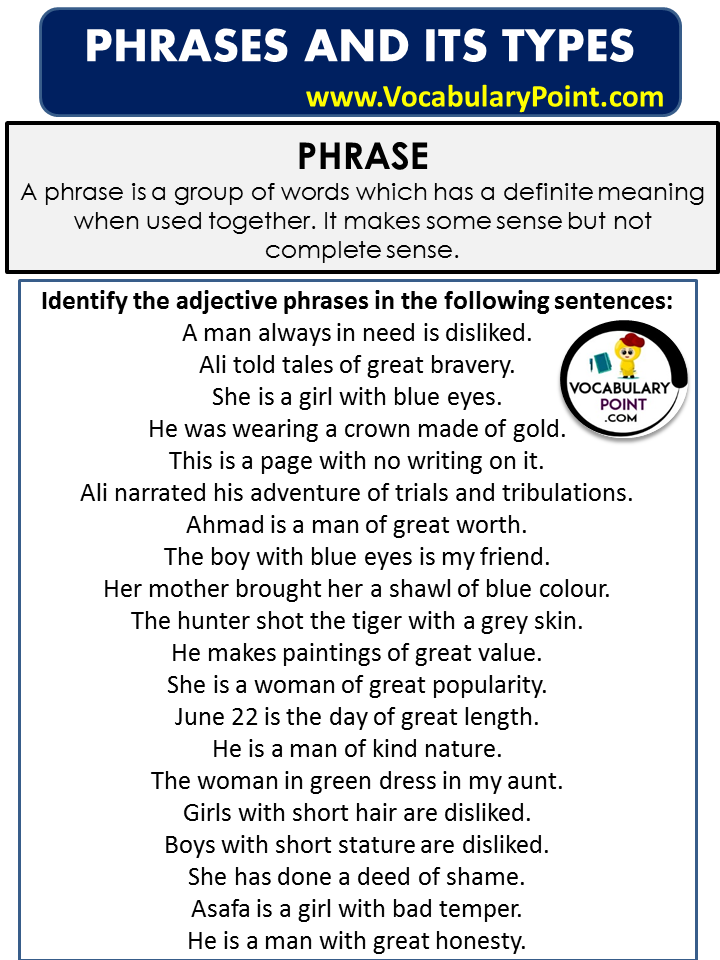 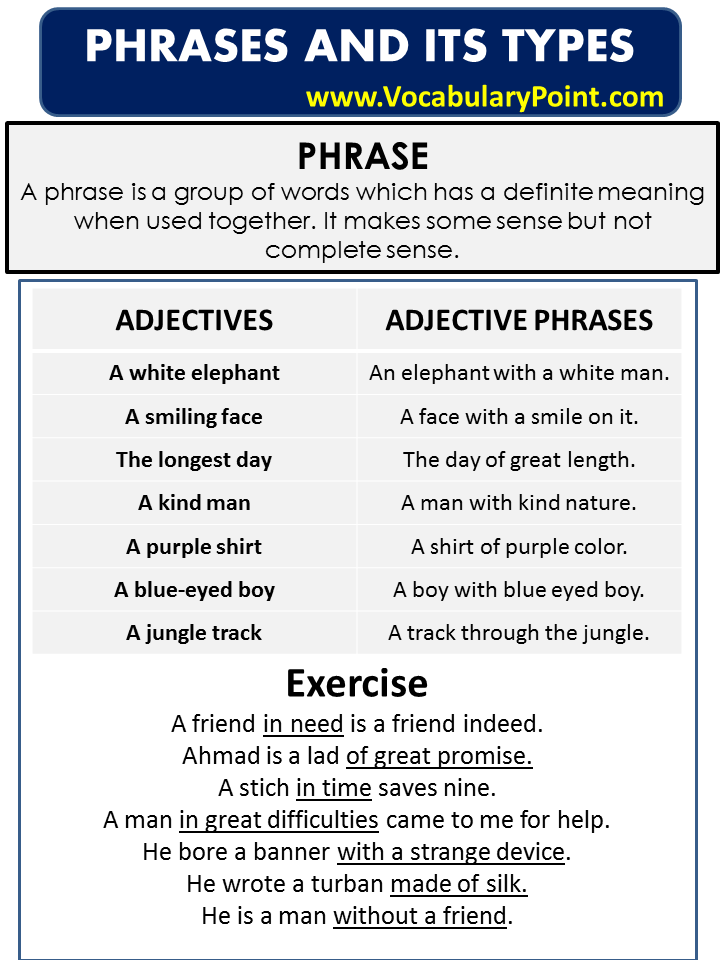 When a word qualifies a noun or a pronoun, it is called adjective. When a group of words without having subject and predicate does the work of an adjectives, it is called ADJECTIVE PHRASE.

These examples are used in a sentence:

Let us study the following adjectives and adjectives phrases which are equal:

Identify the adjective phrases in the following sentences.

Identify the adjective phrases in the following sentences: 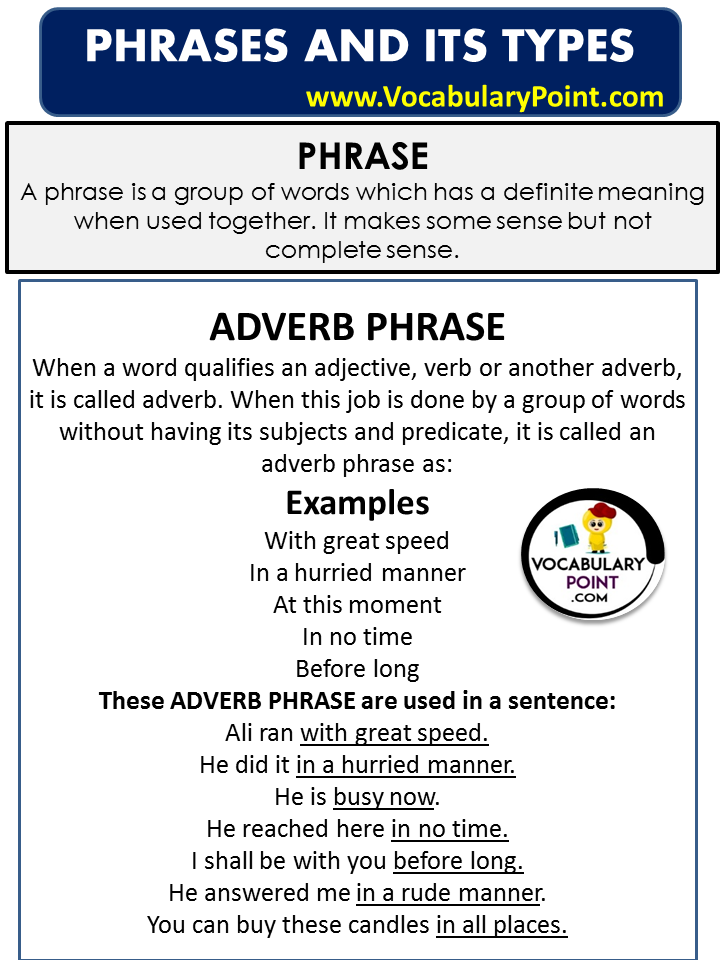 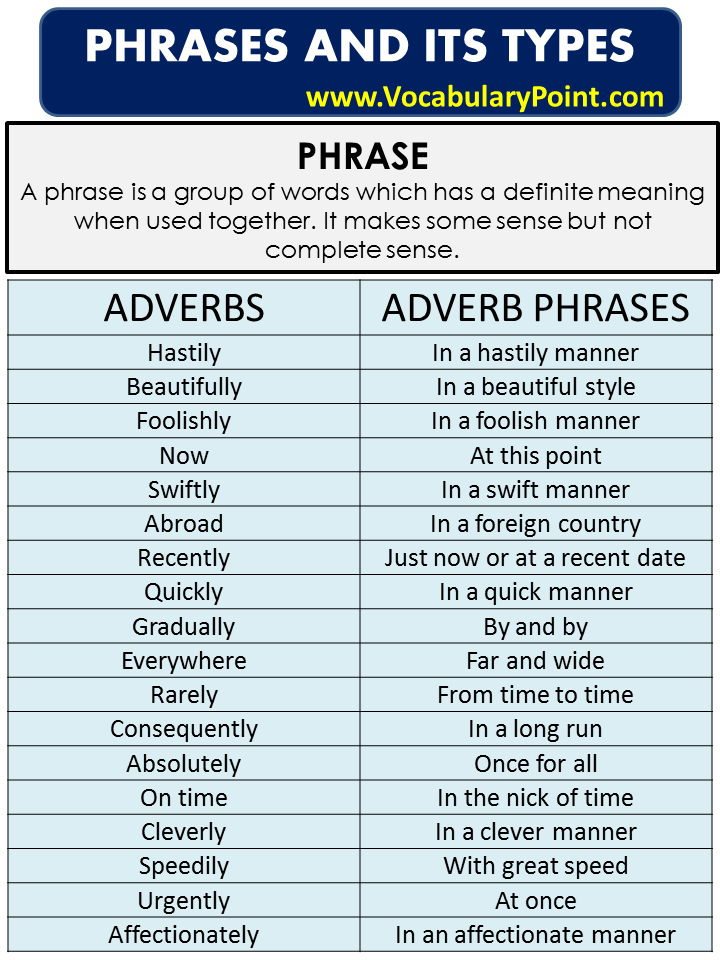 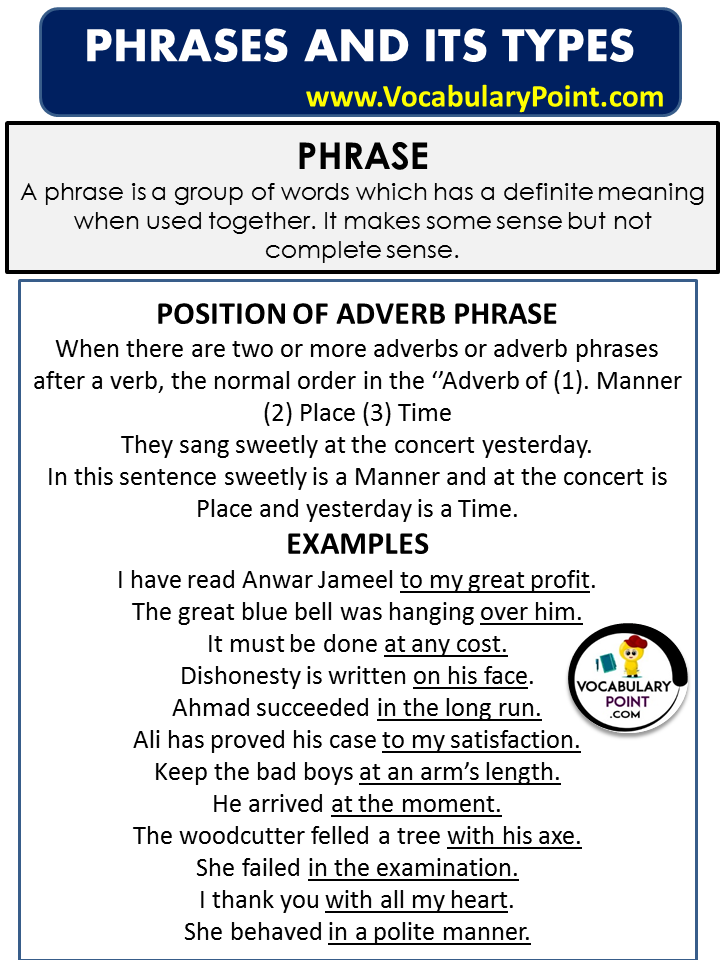 When a word qualifies an adjective, verb or another adverb, it is called adverb. When this job is done by a group of words without having its subjects and predicate, it is called an adverb phrase as:

These ADVERB PHRASE are used in a sentence:

In these sentences shown adjectives:

Let us now study the following adverbs and adverb phrases which are equal.

When there are two or more adverbs or adverb phrases after a verb, the normal order in the ‘’Adverb of (1). Manner (2) Place (3) Time

They sang sweetly at the concert yesterday.

In this sentence sweetly is a Manner and at the concert is Place and yesterday is a Time.

Note: an adverb phrase includes some adverb with preposition called adverbials that modify a verb, an adjective or another adverb.

Identify the adverb phrases in the following sentences. 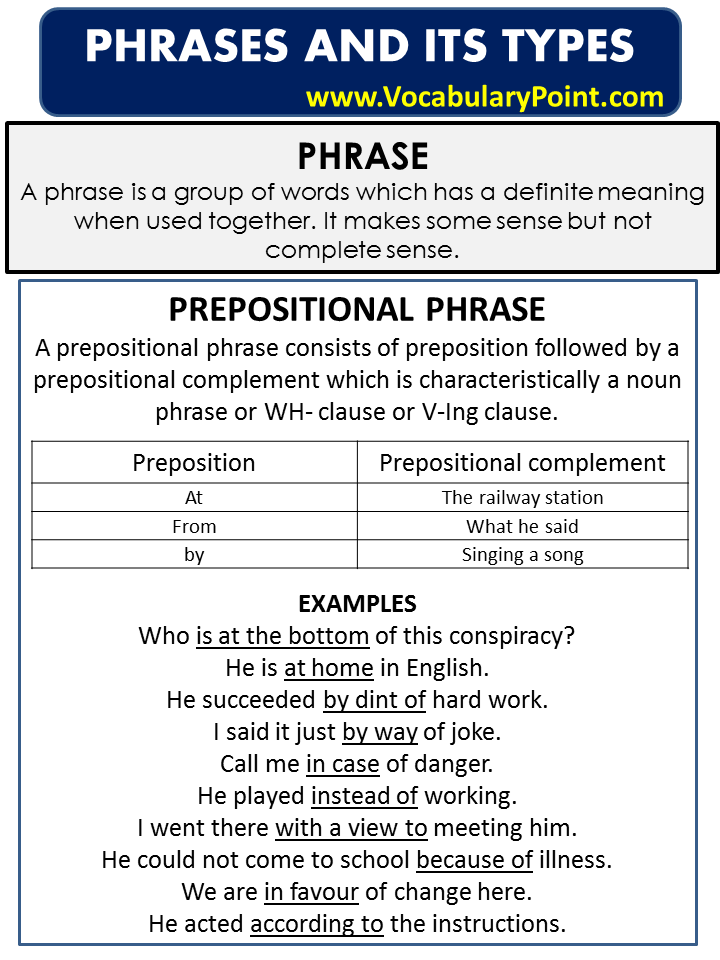 A few prepositional phrases are:

According to, along with, away from, because of, in favor of, in spite of, instead of, in order to, in place of, on account of, with a view to, with regard to, at the bottom of, at home in, by dint of, by way of, in case of etc. 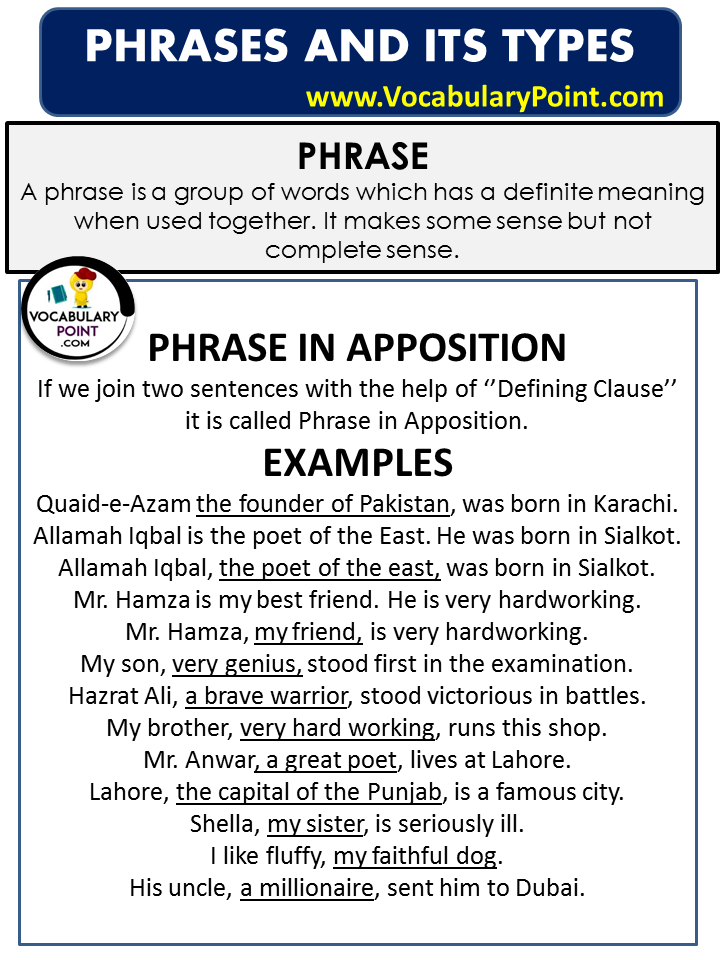 If we join two sentences with the help of ‘’Defining Clause’’ it is called Phrase in Apposition. This phrase generally occurs in the middle of the sentence and sometimes at the end also. 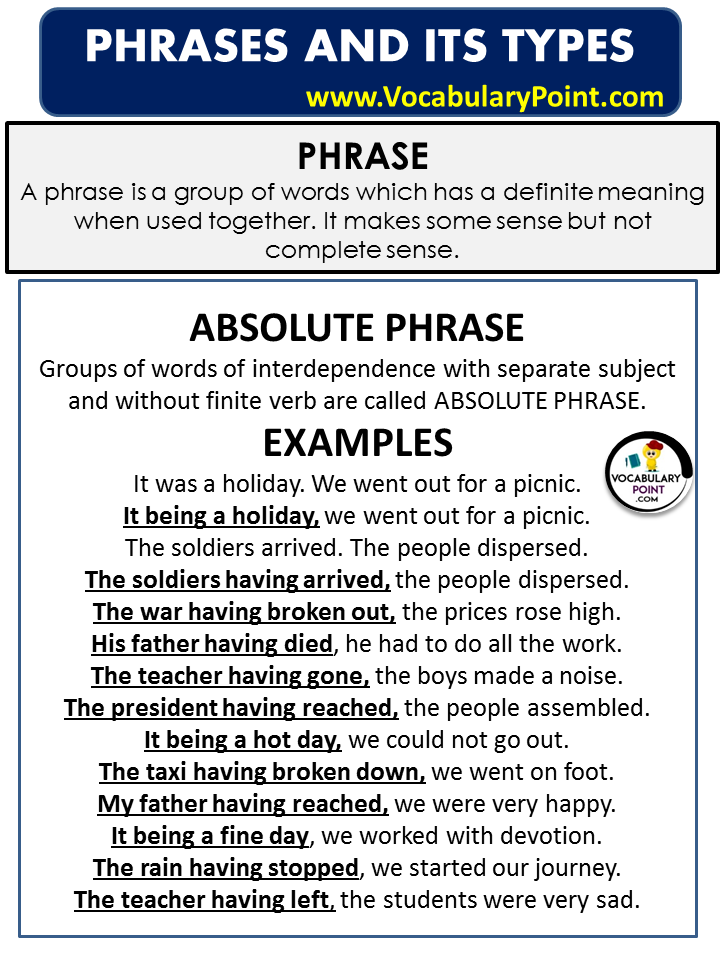 Groups of words of interdependence with separate subject and without finite verb are called ABSOLUTE PHRASE.