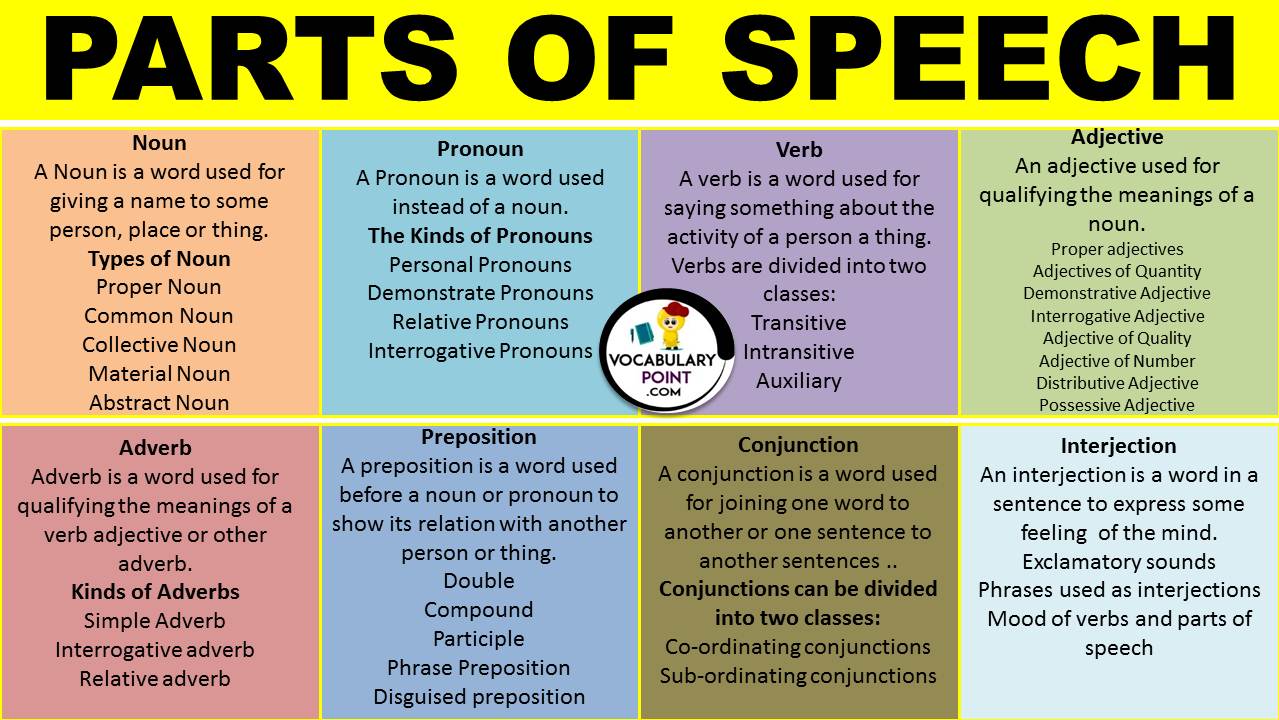 Parts of speech with examples and definition. In English, there are eight parts of speech: nouns, verbs, adjectives, adverbs, prepositions, conjunctions, articles/determiners, and interjections. Each one has a different function within a sentence. For example, a noun is a person, place, thing, or idea; verbs describe an action or a state of being; adjectives modify nouns or pronouns; and adverbs modify verbs, adjectives, and other adverbs.

Most people know about the different parts of speech, even if they don’t realize it. There are eight parts of speech in English: nouns, verbs, adjectives, adverbs, pronouns, prepositions, conjunctions, and interjections. Each part of speech has a specific function in a sentence.

Nouns are words that refer to people, places, things, or ideas. Verbs are words that describe actions or states of being. Adjectives modify nouns and pronouns to describe them in more detail. Adverbs modify verbs to tell when, where, how, or to what extent something happened. Pronouns take the place of nouns and can be used as subjects or objects in a sentence. Prepositions show relationships between other words in a sentence. Conjunctions join together two independent clauses or two items in a list. 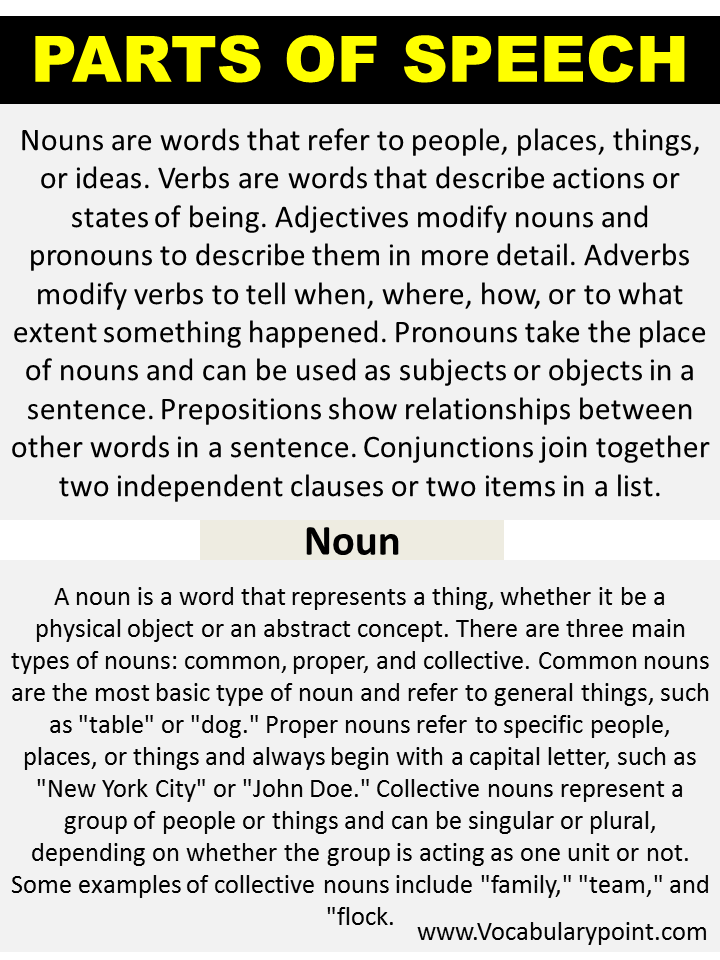 A noun is a word that represents a thing, whether it be a physical object or an abstract concept. There are three main types of nouns: common, proper, and collective. Common nouns are the most basic type of noun and refer to general things, such as “table” or “dog.” Proper nouns refer to specific people, places, or things and always begin with a capital letter, such as “New York City” or “John Doe.” Collective nouns represent a group of people or things and can be singular or plural, depending on whether the group is acting as one unit or not. Some examples of collective nouns include “family,” “team,” and “flock. 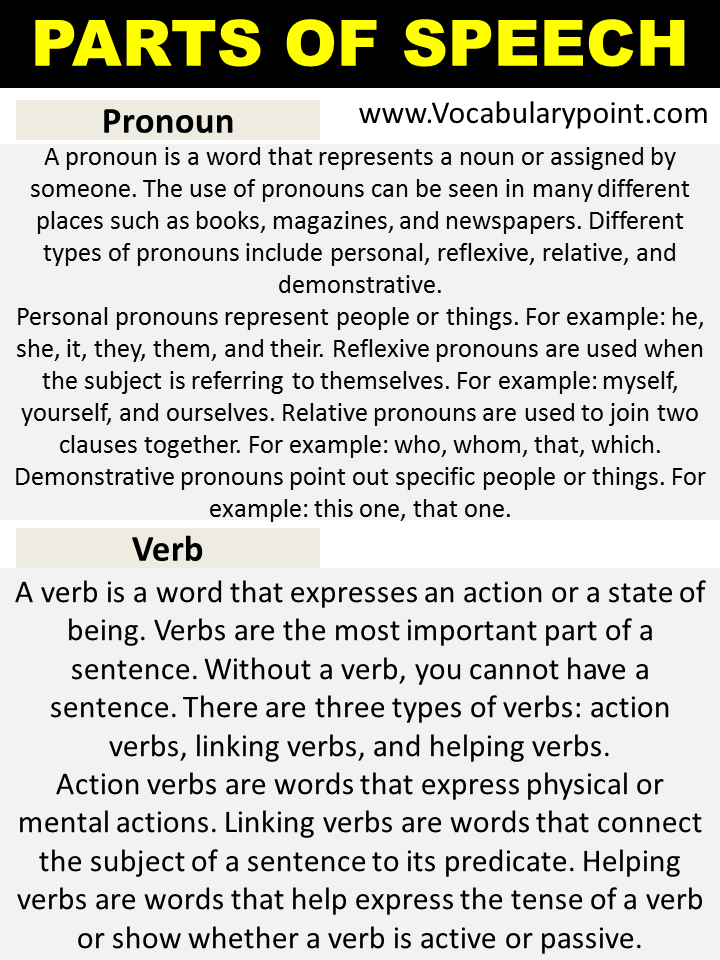 A pronoun is a word that represents a noun or assigned by someone. The use of pronouns can be seen in many different places such as books, magazines, and newspapers. Different types of pronouns include personal, reflexive, relative, and demonstrative.

A verb is a word that expresses an action or a state of being. Verbs are the most important part of a sentence. Without a verb, you cannot have a sentence. 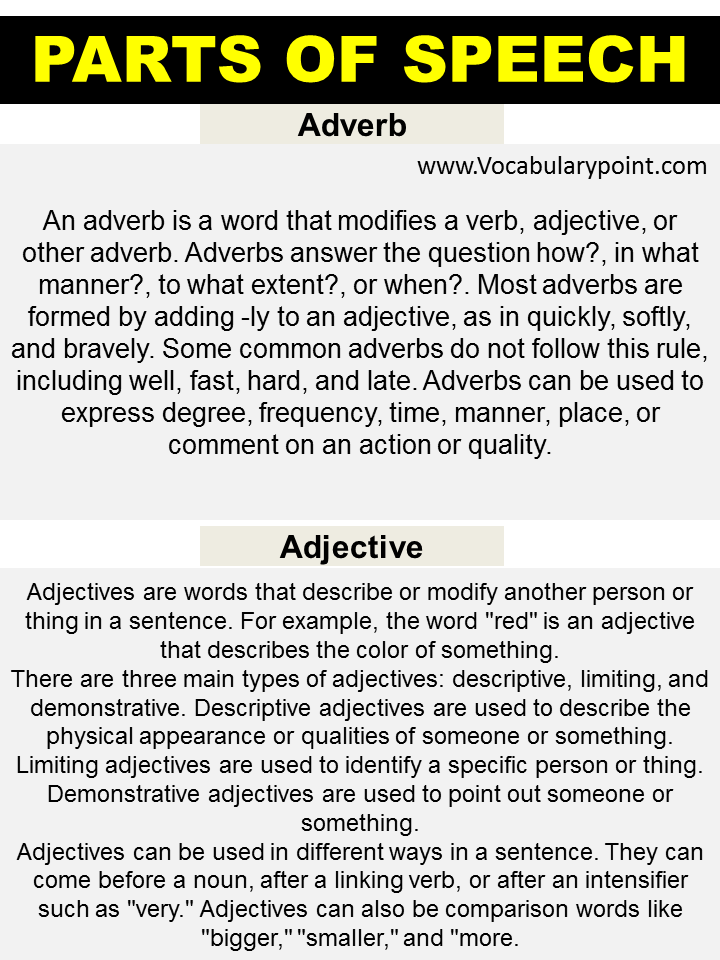 An adverb is a word that modifies a verb, adjective, or other adverb. Adverbs answer the question how?, in what manner?, to what extent?, or when?.

Adjectives are words that describe or modify another person or thing in a sentence. For example, the word “red” is an adjective that describes the color of something. 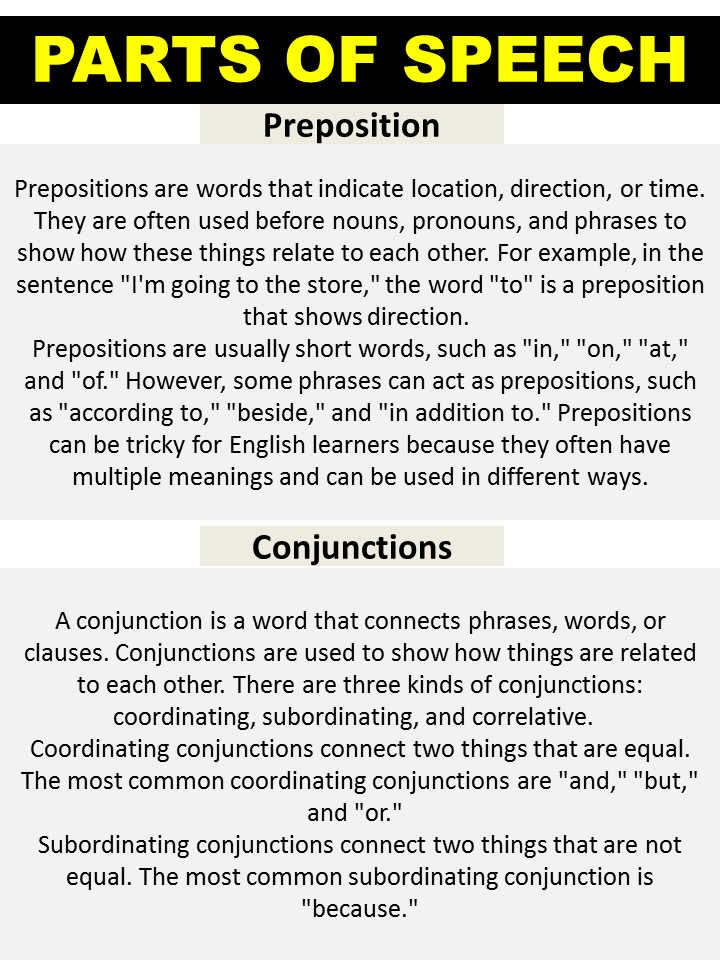 Prepositions are words that indicate location, direction, or time. They are often used before nouns, pronouns, and phrases to show how these things relate to each other. For example, in the sentence “I’m going to the store,” the word “to” is a preposition that shows direction.

A conjunction is a word that connects phrases, words, or clauses. Conjunctions are used to show how things are related to each other. There are three kinds of conjunctions: coordinating, subordinating, and correlative.

An interjection is a word or phrase that expresses strong emotion and is typically used as a part of speech. Interjections are often exclamations, but they can also be questions or commands.

Interjections can add emotion to a sentence, or they can be used to express surprise, anger, or even joy. They are usually placed at the beginning of a sentence for emphasis.

While interjections are not necessary for communication, they can add color and life to language. In fact, many languages have multiple interjections to choose from depending on the situation. 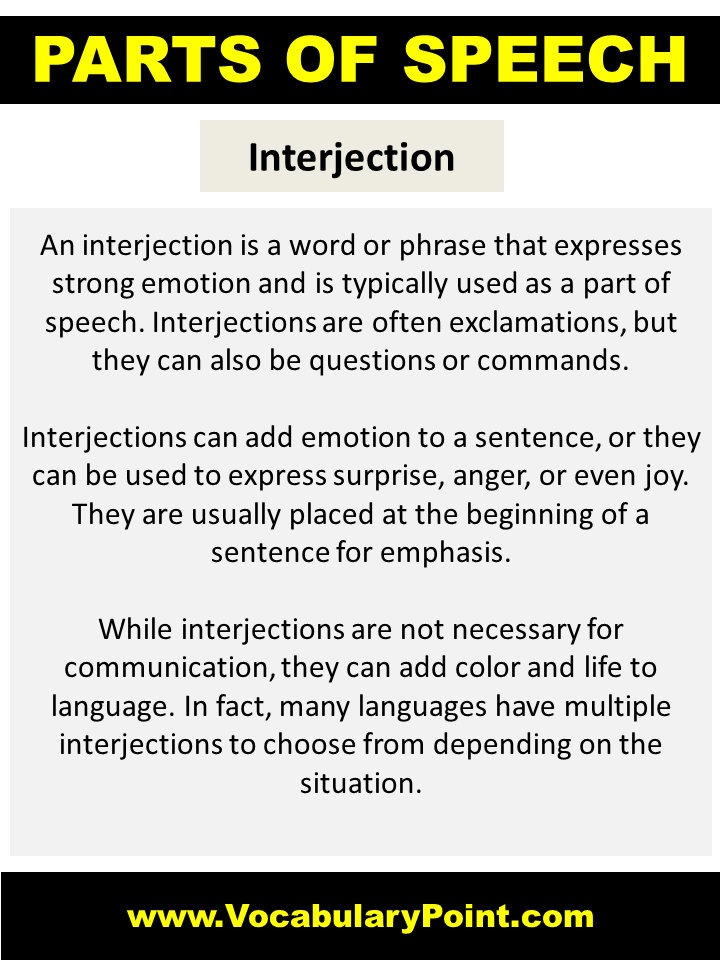 A Noun is a word used for giving a name to some person, place or thing.

Arslan saw a snake in the garden.

In this sentence Garden, snake is a noun. It is because garden and snake show the thing and place so it is called Noun.

A Proper noun is a noun that denotes one particular person or thing as distinct from every other.

A common Noun is a Noun that denotes a general or common person or a thing.

A collective noun is a noun that denotes a group , collection or multitude of similar things considered as one complete whole.

A material Noun is a noun that denotes the matter or substance of which things are made.

An Abstract Noun is the name of an idea, a quality, an action or a situation it refers to something immaterial . 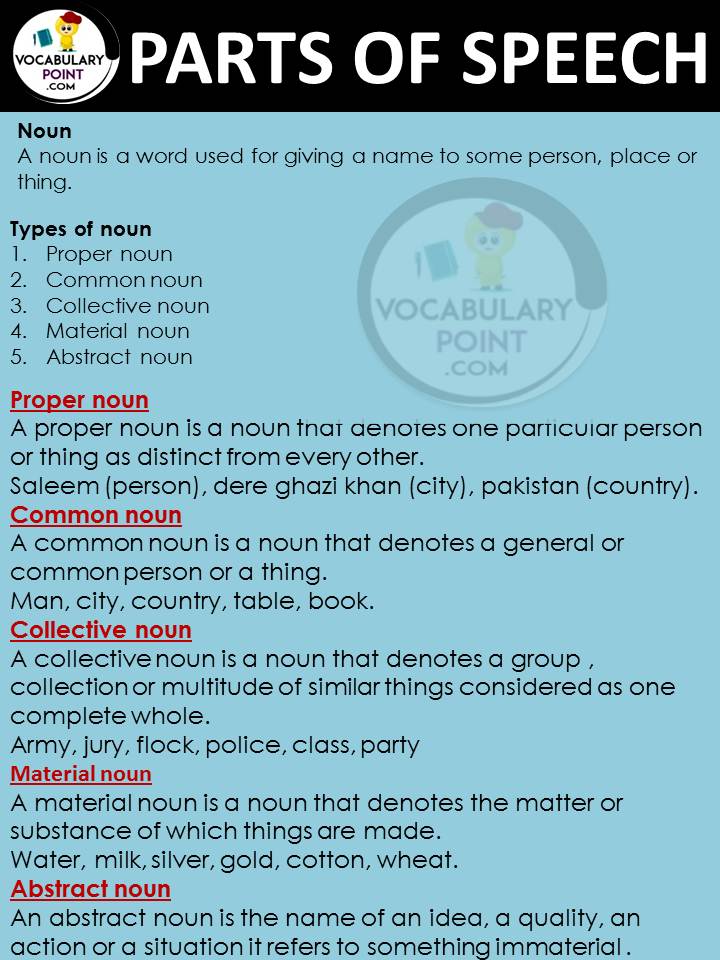 A Pronoun is a word used instead of a noun.

The Kinds of Pronouns

The personal pronoun stand for are so called because they stand for the three persons. (I, We, You, he, she, It…..)

They are two kinds:

The demonstrative pronoun is so called because it demonstrates or points to some noun going before and is used instead of it.

A relative pronouns is so called because it relates to some noun or other pronoun going befor.

An interrogative pronoun is one which asks a question. 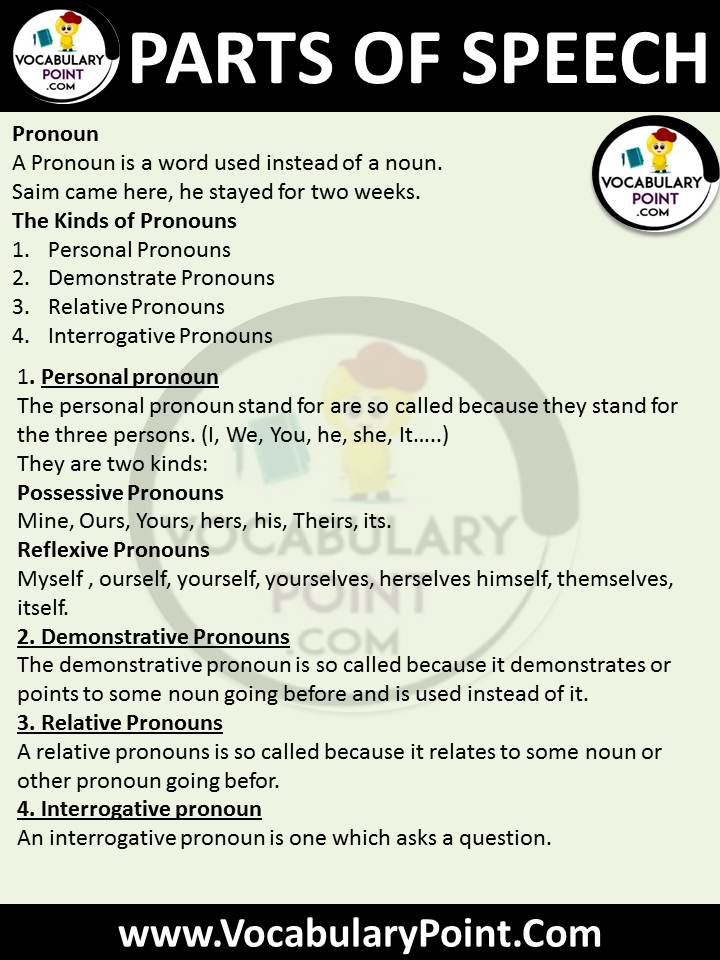 what are the parts of speech

A verb is a word used for saying something about the activity of a person a thing.

Verbs are subdivided into two classes:

A verb is transitive if the action does not stop with the doer but pass from the doer an object.

A verb is intransitive verb when the action stops with the doer and does not pass from the doer to an object.

An auxiliary verbs is that verb which helps to form a tense or mood of some other verbs.

An adjective is a word used for qualifying the meanings of a noun or pronoun.

There are eight kinds of adjectives

These are adjective that describes a thing by some proper noun.

These are adjectives that show of what sort or in what state a thing is.

These are adjectives show how much of a thing is meant.

These are adjectives that show how many things there are or in what numerical order any of them stands.

There are adjectives show which or what thing is meant.

These are adjectives that show how that things are taken separately or in separate lots.

These are adjectives that are used with noun to ask questions.

These are adjectives that are used with nouns to show the possession of a thing. 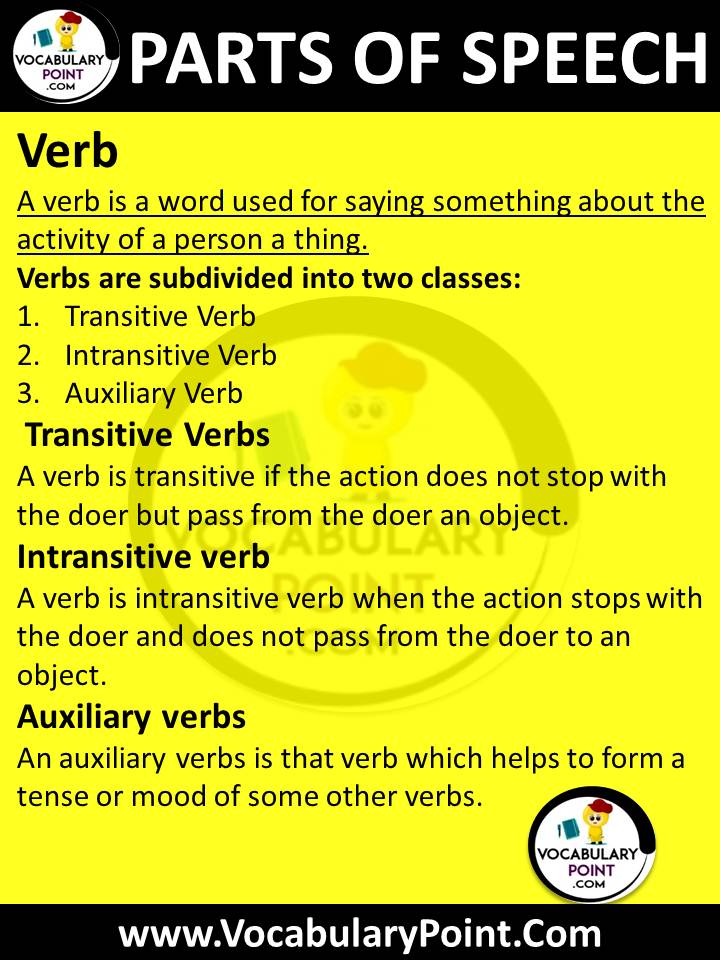 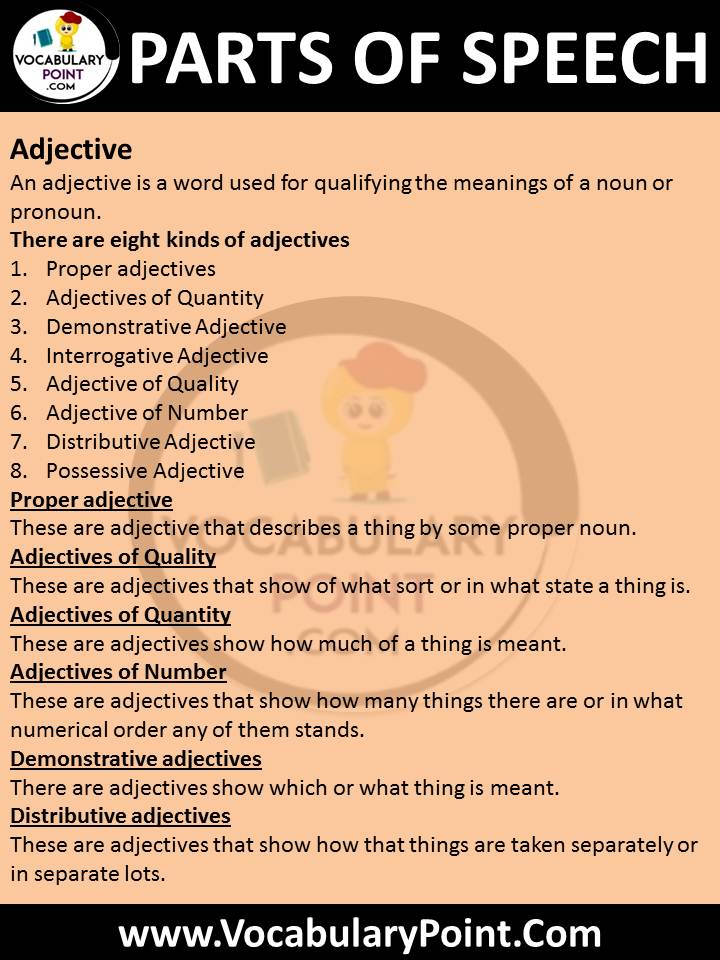 the 8 parts of speech with examples

Adverb is a word used for qualifying the meanings of a verb adjective or other adverb.

There are three different kind of Adverb.

A simple adverb is used merely to qualify the meaning of a word to which it is attached.

The Interrogative Adverbs are those which are used for asking questions.

A relative Adverbs not only qualifies any part of speech except a noun or pronoun but also connect sentences. 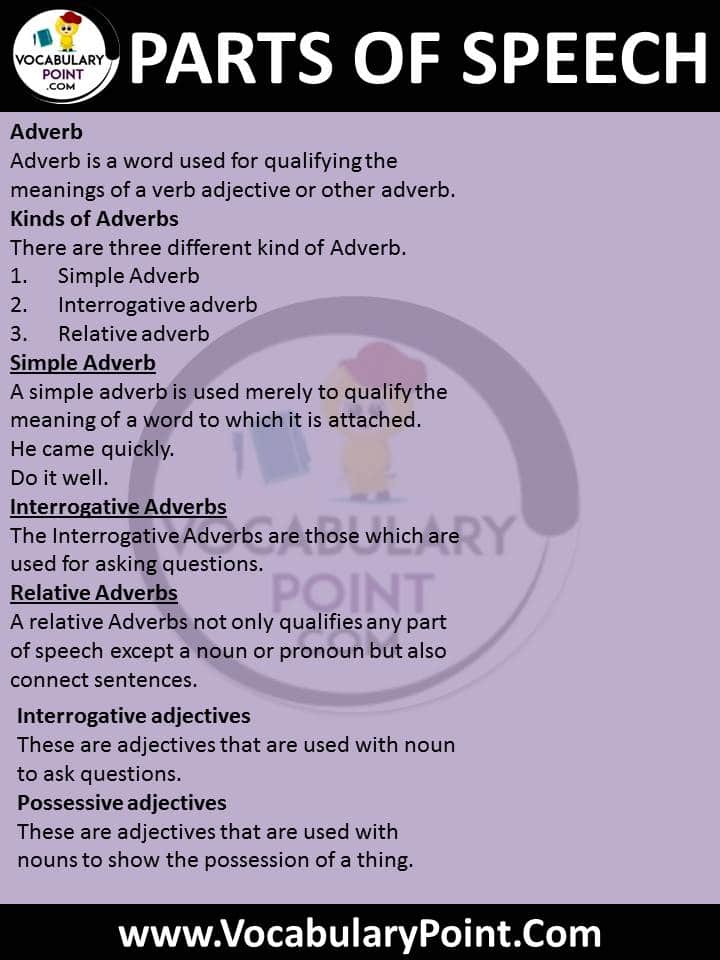 A preposition is a word used before a noun or pronoun to show its relation with another person or thing.

Into, unto, from, under, over, against, from off, from within

Across, Behind, Above, within, beside, beyond

During, notwithstanding, concerning, regarding, owing.

By means of because of, in opposition to, with a view to, instead of, with reference to

A conjunction is a word used for joining one word to another or one sentence to another sentences .

Akram and his brother came.

I went there but he was absent.

Conjunctions can be divided into two classes:

They join sentences of coordinate rank.

He came here and he met me.

He came to see me but I was not at home.

They join a subordinate or sependent clause to a principle clause rank.

An interjection is a word in a sentence to express some feeling  of the mind.

Hurrah! I have found my watch.

An interjection properly speaking is not a part of speech because it has no grammatical connection with any other word or words in the sentences . it is merely an exclamatory sound to denote some strong feeling or emotion. 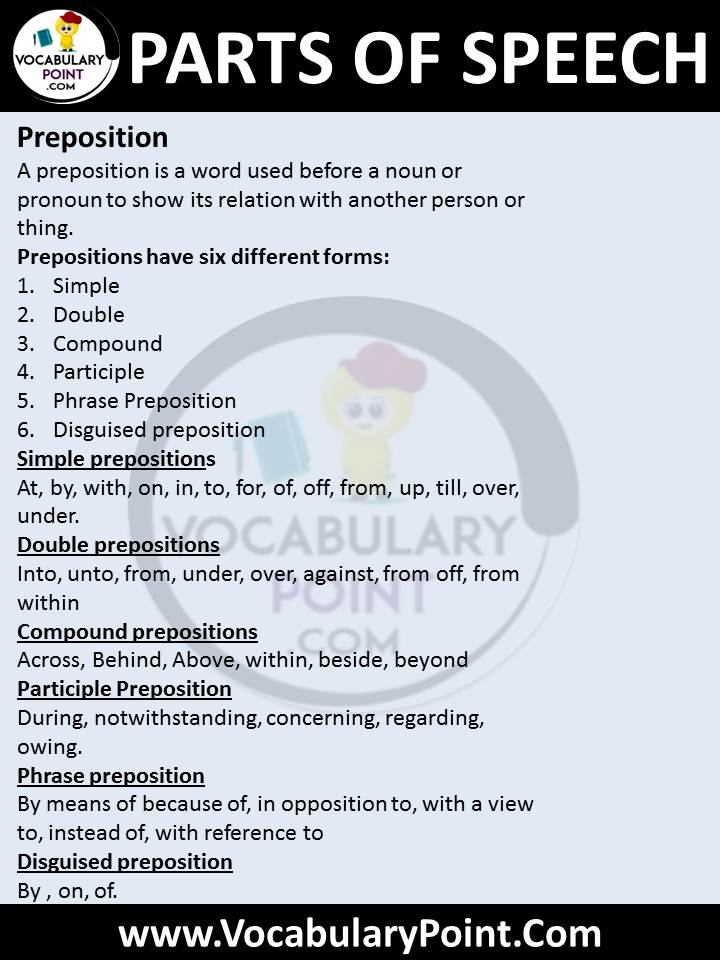 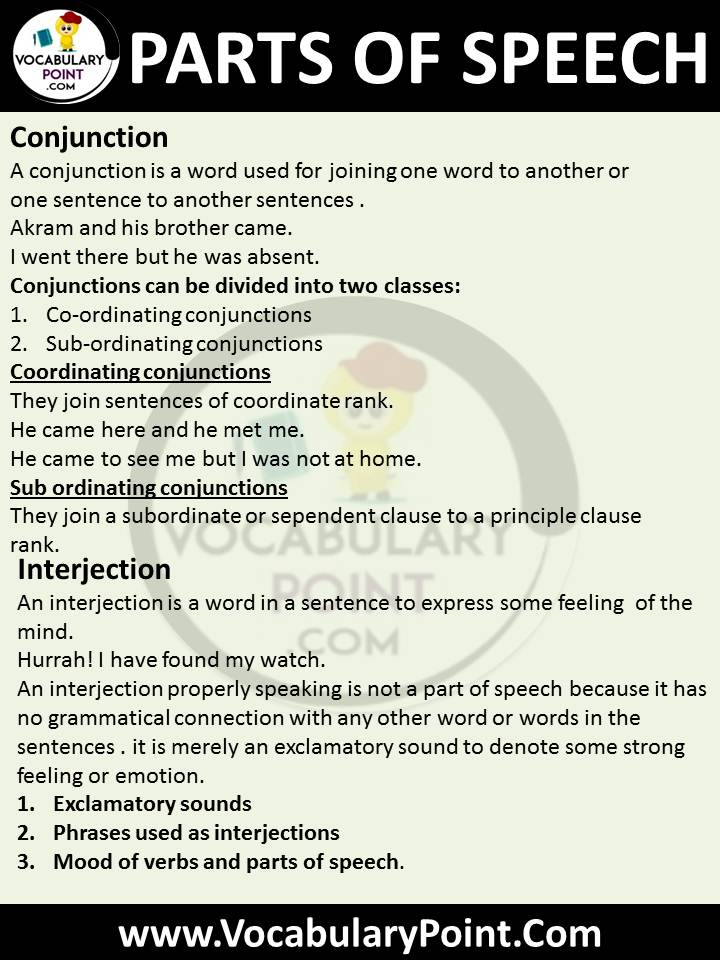